Nothing’s more important to Daphne and Paul than their two boys. That’s why one of their goals has always been to plan for the future.

After hearing about the Learning Quest® 529 Education Savings Program on a television commercial, Daphne and Paul decided to open accounts for both sons and routinely contributed. At the time, her oldest son Blake had just started middle school and her youngest Matt was in elementary school. 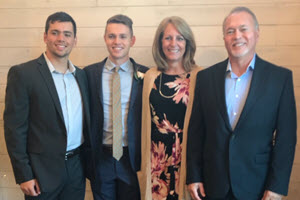 Daphne said, “From the very start, we set up automatic contributions on each account. This made it easy to invest when our money was out of sight and out of mind.”

Many years later, both sons ended up using their 529 accounts to help pay for college.

Blake graduated from Truman State University in 2017 with a degree in biology. He did not use all of the funds in his Learning Quest account, so his parents transferred it to his younger brother’s account. Matt started his freshman year this fall at Washburn University.

“Transferring money between the Learning Quest accounts was so easy to do,” Daphne said. “The people at American Century Investments who manage the Learning Quest program are always so helpful and make things as painless as possible.”