The Blessing of a Father’s Provision

Jillian’s dad, James, took the initiative to open Learning Quest® 529 Education Savings accounts for his two granddaughters early on in their lives. Years later, Jillian now counts her dad’s planning for her daughters’ educations as one of her greatest blessings.

Jillian said, “My dad had the forethought of ‘Oh, this could be a burden down the line, let’s make this happen.”

James didn’t want his family to feel financial pressure on either end of the college experience. He didn’t want there to be a burden on his daughter when sending her kids to college and didn’t want the burden of student loans on his grandchildren after college.

Years later, Jillian’s family is embracing the gift of education. 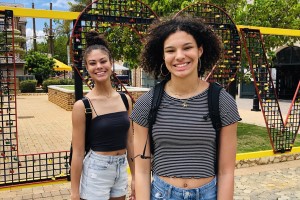 Jillian’s oldest daughter is a junior in college. She is currently at the University of North Texas studying Online Retail Marketing. With the help of her Learning Quest 529 plan, Jillian hasn’t had to pay a penny for tuition, books, or university boarding.

Jillian’s daughter is super appreciative of her grandfather’s investment. The magnitude of this gift really hit her when she started college.

“My daughter is super grateful. She does work, but that gets to be her extra money. She doesn’t have to work to keep herself in school,” Jillian explained.

Jillian’s youngest daughter is now a junior in high school. With hopes of going into the medical field, she is extremely thankful for her grandpa’s investment in her future. She is still deciding which university she wants to attend, but because of her 529 plan, she is able to look across state lines for the best opportunity.

Jillian’s daughter has been motivated by her 529 account while in high school. Knowing that she has money in her account that is potentially growing, she has taken the initiative to apply for scholarships to help pay for her undergraduate degree in hopes of using her 529 funds for medical or graduate school.

“She’s like ‘Woah. If I get scholarships and work really hard, I still have money to go to medical school.’ It’s motivated her, thinking in that regard.”

The Learning Quest 529 Plan has been so beneficial to Jillian’s family that they recently opened 529 accounts for James’s great-grandchildren. They have seen firsthand what an investment in their loved one’s future now can do years down the line.